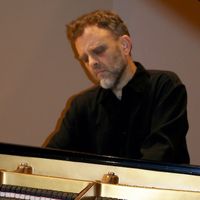 Originally scheduled for the spring 2020 season when most concerts had to be cancelled due to the CoVid pandemic, this concert will feature Brazilian composer Heitor Villa-Lobos’ suite of sixteen Cirandas – a group of pieces based on Brazilian children’s songs which are set in a very colorful and rhythmic way. While they are widely considered to be Villa-Lobos’ best music for piano, they have only rarely been heard outside Brazil because they were published by a Brazilian firm with no international distribution, only recently becoming available. The concert will open with Mexican composer Federico Ibarra’s seventh sonata, completed in 2012 and dedicated to Sturm, who will release a recording of it later this year. It will be paired with a short piece that Ibarra completed in 2019, entitled Annihilation of a Dream. Rounding out the program will be Argentine composer Alejandro Rutty’s Qualia (2015), written in an extended tango style with layers of rhythm and accents. 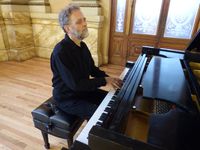 The concert is built around Federico Ibarra Groth's Sonata for two celli and piano, in which Fred Sturm will be joined by cellists Ian Brody and Lisa Collins.

Also on the program:

Both Jorge Vidales and Arturo Márquez were students of Ibarra. Halffter was a major musical figure in Mexico, teaching at the conservatory, founding Ediciones Mexicanas de Music (publisher of most of Ibarra's works), etc.

A solo performance of recent works by three living composers from Argentina (Alejandro Rutty), Mexico (Arturo Márquez), and Spain (Mario Carro), all of whom use rhythm as a central component of their music. These new works will be paired with classic rags and Afro Cuban dances from the early twentieth century- pieces that lie on the border between popular and classical music, and that share an emphasis on rhythm.

Co-presented with the UNM Music from the Americas Concert Series

Ginastera was a quintessentially nationalistic composer, trying to capture the essence of his native Argentina , with its rolling pampas and cultivated cities, its rough and wild folk dances and its sophisticated tangos.  His music is written in an exhilarating style, ranging from delicately seductive lyricism, though driving complex cross rhythms, to massive climaxes.

Argentine pianist Alejandro Cremaschi will present a sampling of Ginastera’s masterful writing for piano, including three of his nationalistic piano sets: Suite of Creole Dances, Three Pieces, and Twelve American Preludes. Cremaschi’s new edition of Ginastera's 12 Preludios Americanos, which includes his recording of the set, will be released later this year by Fischer Publishing Company, and he will be presenting them to the College Music Society convention in Santa Fe on Sunday, October 30.

Local pianist Fred Sturm will provide context for Ginastera’s very “Argentine” style of composition, by performing music of predecessors and successors from neighboring countries Brazil and Uruguay.  Heitor Villa-Lobos was a pioneer of nationalistic Latin American music, and a close friend of the younger Ginastera, whom Villa-Lobos referred to as his “spiritual heir.” Sturm will play Villa-Lobos’ Alma Brasileira and Saudades das Selvas Brasileiras.

Ginastera in turn inspired later generations of composers, including Miguel del Águila of Uruguay (familiar to many in Albuquerque as the composer of the opera Time and Again Barelas, commissioned for the Albuquerque tricentennial). Sturm will perform Águila’s Sonata #2, inspired by popular Latin American styles.

Pianist Alejandro Cremaschi, a native of Argentina, currently teaches at the University of Colorado at Boulder. His playing has been described as “pristine” and “passionate” by the Washington Post, and “polished” and “exemplary” by the Fanfare magazine. Praised as an intelligent and sensitive pianist, he has played in numerous cities worldwide, including Buenos Aires, Guadalajara, Montreal, Pittsburgh, London, Washington, Kuala Lumpur and New York. Fred Sturm has specialized in Latin American music for the past 25 years, performing and recording a wide repertory, with a particular emphasis on Villa-Lobos and Mexican composer Federico Ibarra. Peter Burwasser wrote of Sturm’s recording of Ibarra’s works for piano solo, "He plays the music of Ibarra as if he were writing it on the spot. It is rare to hear a musician so inhabited by the material."